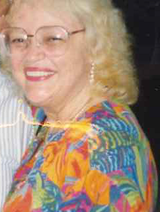 Memorial Candle Tribute From
Gaffney - Dolan Funeral Home
"We are honored to provide this Book of Memories to the family."
View full message >>>
In Memory of
Joan Everglen
Quitadamo
2012
Menu
Plant a Tree In Memory of Your Loved One
Click Here

Joan was born to Emory and Lucille Edwards. Joan was a graduate of Westerly High School. She attended Rhode Island College and graduated with a degree in Elementary Education. She taught fourth grade at State Street School.

In addition to raising a family, Joan was integral in the day to day operations at the Andrea Hotel. Following the death of her husband, Ralph, she continued to lead the daily operation of the hotel. During her 50th summer she received a citation from the State of Rhode Island for her involvement in the management of Misquamicut’s family-friendly Andrea Hotel.

Joan married again twice, her second husband Edward Isles and her third husband of twenty years Pasquale Quitadamo. Over the past twenty years, Joan enjoyed winters in Florida with her late husband, Pat and her beloved dog Brandi. During the summers, Joan and Pat continued to work at the hotel.

Joan is survived by her step-mother Helen Edwards, her sons Ralph, Christopher and Kevin, her daughter-in-law Judy and her step-daughters Marie, Lena, Donna and Marianne, her grandchildren Michelle, Rebecca, Laura, Bradley, Joshuwa, Chelsea, Christopher and Steven, as well as Pat’s grandchildren Tara, Kari, Erin, Heather, and Daniel and many great-grandchildren. Joan is predeceased by her parents, Emory and Lucille; her spouses Ralph, Edward and Pasquale, and her sons, Leonard and Phillip.

Visitation hours will be held at Gaffney Dolan Funeral Home, 59 Spruce St., Westerly, from 3-6pm on Sunday, September 9, 2012. A Mass of Christian Burial will be celebrated on Monday, September 10, 2012 at 10am at St Clare Church, Crandall Ave., Westerly. Burial will be follow in Oak Grove Cemetery, Ashaway. In lieu of flowers please make a donation to South County Hospital.


Provide comfort for the family by planting a tree in memory of Joan Everglen Quitadamo (Edwards), please visit our Heartfelt Sympathies Store.