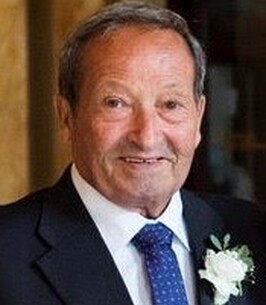 He is predeceased by his son, Francesco "Frankie" DeSantis, brothers Angelo, Giuseppe, and Luigi, mother and father, Carmela and Francesco DeSantis, as well as many beloved aunts, uncles, and cousins.

He leaves behind his wife Cristina, daughter Josie and son-in-law Mike Panciera, son Joey and daughter-in-law Sue DeSantis, and daughter-in-law Linda DeSantis, wife of the late Frankie. He leaves his grandchildren: Chelsea DeSantis, Melanie DeSantis, Cristina Panciera Medeiros and her husband Brandon, Julia Panciera, Heather DeSantis, and Benjamin Calitri. He also leaves his sister Connie McGuire, and brothers Eddie DeSantis and Sal DeSantis, and many beloved nieces and nephews. He was known as Papi, Uncle Mike, and Nanu. With a love for all, friends outside the family also affectionately knew him as Uncle Mike or Nanu.

In 1955, he left Calabria with his parents and siblings, taking the SS Flotta Roma to America to settle on Oak Street before raising his family on Batterson Ave. He was married to Cristina for 62 years. While living in Calabria, he would walk through the mountains from Santa Maria la Fiumara to la Comuna to visit her. He serenaded her again on their sixtieth anniversary.

He worked the land of his garden for more than sixty years, and created his paradise of fig trees, tomatoes, gagomile, silver dollars, and, of course, hot peppers, that resembled the hills of his homeland. The back door and picnic table were always open for a shot and a beer. He loved sitting down to big, loud meals at home with the whole family. He loved to "scream" for ice cream with his grandkids! He was always smiling and joking around.

For 42 years and twelve days, he worked at the American Velvet Company in Stonington, Connecticut, in addition to working many other odd jobs over the years, including landscaping and running the Hilltop Social Club with his father, Francesco. After retiring he became chauffeur for his granddaughters, bringing them to and from school and sports practices, never missing a game.

He was a fourth degree member of the Knights of Columbus, the Narragansett Council, selling many winning 20/20 tickets and recruiting many members. He was a devoted parishioner of Immaculate Conception Church, where he was also a Eucharistic minister and altar server.

His favorite pastimes were beating his brothers at a game of bocce, playing pitch with fellow Knights after meetings and at the Cally Club on Tuesday nights with his sons and brothers, hollering at his grandkids over a game of Briscola or Scopa, watching the Game Show Network and Steve, funging in the woods of Ashaway and Connecticut, making soupie and homemade wine with the family, and of course spending days in the sun tsapping in the garden.