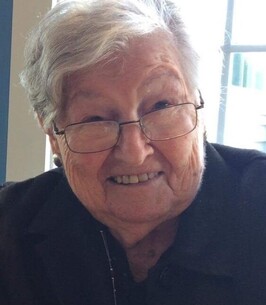 Virginia J. (Campanella) Alice, 99, wife of the late Joseph P. Alice, passed away peacefully Tuesday evening, December 22, at the Yale/New Haven Westerly Hospital. Recently, she had been a resident of the Royal Westerly Nursing and Rehabilitation Center.
Born in Westerly, Virginia was the daughter of the late Francesco Maria (Frank) Campanella and the late Maria Carmela (Sculco) Campanella Buono.

Joe married Virginia, “his Oak Street girl’, on March 24, 1945 in the Church of the Immaculate Conception in Westerly and, at the time of his passing in 2015, they had been married for over seventy years.

Virginia was a faithful communicant of St. Pius X Church in Westerly. She and her late husband were among the founding parishioners when St. Pius X was established in September 1955. She was a long-time member of the Ladies Auxiliary of the Harley P. Chase Post, VFW. She was employed by the George C. Moore Company for almost thirty years in the production of elastics and Spandex. Joe often remarked during her working years, “If your underwear stays up, you can thank Virginia.”

Virginia had many talents and indulged her various passions. Countless children in the Westerly community and beyond found goodies delivered by Santa in Christmas stockings hand knit and embellished by her. She was an outstanding cook, often provoking lively family discussions as to who made the best meatballs. But amid the discussions, Virginia never conceded her position in the top spot. She was also an accomplished, creative baker. In retirement she became part of the cottage industry movement operating a small business creating specialty cakes for all occasions. An avid gardener well into her nineties, Virginia could grow anything. Her backyard lawn and flower gardens were lush and a riot of summer color and textures, while her vegetable garden yielded enough to feed her family and to share with others. But her special horticultural talent was cultivating orchids and African violets. Virginia was an enthusiastic sports fan, but all took a back seat to “her beloved boys”, the Boston Red Sox.

Virginia is survived by her daughter Paula Alice Mitchell and her husband Bill of Westerly; her granddaughter Kate Crimmins, her husband Jim, and their daughters Mia Faye and Celia Rose of Pasadena, Maryland; her grandson James Alec Mitchell of Beltsville, Maryland; and her granddaughter Leah Alice Benedetti and husband Roland of Sunnyside, Queens, New York. Virginia also leaves an older sister Marie Antoinette (Campanella) Ravenelle of Westerly, along with many nieces, nephews, and many special friends.

Due to Covid restrictions, there are no visiting hours. A Mass of Christian Burial will be celebrated at 11 am on Saturday, January 16th at St. Pius X Church, 44 Elm Street, Westerly. Burial will be private. In lieu of flowers, please consider making a donation in Virginia’s memory to St. Edmund’s Retreat at Enders Island, PO Box 399, Mystic, CT 06355 or online at www.endersisland.org/donate. Gaffney-Dolan Funeral Home, 59 Spruce St., Westerly is in care of the arrangements. For online condolences please visit www.gaffneydolanfuneralhome.com