To share your memory on the wall of Rev. Francis Giudice, sign in using one of the following options:

Provide comfort for the family by sending flowers or planting a tree in memory of Rev. Francis Giudice

Provide comfort for the family by sending flowers or planting a tree in memory of Rev. Francis Giudice

Son of the late Gennaro and Rose Giudice, he attended Westerly public schools, graduating from Westerly High School as President of the Class of 1946. He enlisted in U. S. Army for two years, serving in Korea. Upon his return, he studied at Our Lady of Providence Seminary in Warwick, St. Mary Seminary in Baltimore, Maryland, and the American College in Belgium in preparation for the priesthood. He was ordained to the priesthood, July 1, 1956, in Louvain, Belgium, by Bishop Russell J. McVinney. After a summer assignment at St. Clare Parish in Misquamicut, he served as assistant pastor at St. Jude Parish in Lincoln and part-time faculty member at LaSalle Academy in Providence. The following year, he became part-time chaplain at Our Lady of Fatima Hospital, North Providence.

From 1959-61, Father Giudice pursued post-graduate studies in hospital administration at St. Louis University in St. Louis, Missouri. In 1961, he became chaplain at St. Joseph Hospital and Assistant Secretary for Catholic Hospitals in the Diocese of Providence.

In 1962, he became assistant pastor at Holy Angels Parish, Barrington (1962-67), where he worked with the pastor and the parish community to fundraise and construct a new church building. Between 1967-82, Father Giudice was assistant pastor at Assumption Parish, Providence. While continuing to serve at Assumption Parish, he was appointed Vicar for Community Affairs. He was instrumental in helping to establish community health centers in Providence.

In 1982, Father Giudice became rector of SS. Peter and Paul Cathedral, Providence, where he served until his retirement as Pastor Emeritus in July 2004. He had a life-long affinity for the poor, and during his time at the Cathedral, Father championed the cause of poverty relief in Haiti after visiting the island in 1981. His advocacy led to the Providence-Haiti Outreach project and the construction of a school and athletic complex that continues to serve and feed hundreds of youth.

In addition to his parish duties, Father Giudice also served as Dean of Providence Deanery #1 and Deanery Vicar of Providence South Region #7. In the Diocese of Providence, he was a member of the Priests' Senate, the Human Relations Commission, and the Permanent Diaconate Board. Father Giudice was the Diocesan Moderator for the St. Vincent de Paul Society, representative to the Interfaith Health Care Ministries Board of Directors, and member of the U.S. Catholic Conference Committee on social development and world peace. In 1992, he completed sabbatical studies at the Institute of Pastoral Studies at Loyola University, Chicago.

A kind and gentle man, Father Giudice never lost his love of Westerly, especially his Oak Street roots. The fifth of seven children, he was predeceased by his siblings Helen Giudice, Santa Aldrich, Judy Iacoi, and Samuel and James Giudice. Surviving is his brother John Giudice of Westerly, a large extended family of Giudice, Iacoi, and Aldrich nieces and nephews, great-nieces and nephews, and many who loved and considered him their family priest.

A Concelebrated Mass of Christian Burial will be offered to repose his soul on Thursday, February 11, at 11 am at Immaculate Conception Church, Westerly. Burial will be private.

Donations in memory of Father may be made to Providence-Haiti Outreach, 125 Scituate Ave., Cranston, RI 02921.

We encourage you to share your most beloved memories of Rev. Francis here, so that the family and other loved ones can always see it. You can upload cherished photographs, or share your favorite stories, and can even comment on those shared by others.

Posted Feb 09, 2021 at 02:52pm
I would like to extend my sincere sympathy to Father Giudices family. He was our Parish priest at Holy Angels Church from 1962-1967. I remember him as being kind and he was very well loved by members of our parish. May he Rest In Peace.
Comment Share
Share via:
MA

Posted Feb 09, 2021 at 01:35pm
Fr. Guidice was such a good priest. He saw in me the potential that I did not see in myself. He hired me when he first became Vicar for Community Affairs for the Diocese. He encouraged me to go to college and provided flex time for me to attend with a full scholarship from RI College. His confidence in me continued as I graduated from college and continued in the Community
Affairs office as Program Monitor for all programs funded under the Vicariate. There are no words to express how grateful I am for this truly dedicated priest and support of me in my professional life. God bless you. Peace and love, Dr. Marion F. Avarista
Comment Share
Share via:
SW

Father Guidice’s love of God and of Life were evident in every aspect of his being. I am blessed to have been his friend as was my Dad, Pat Pezzelli. The two of them found a kindred spirit in one another totally enjoying their missions and getting to know and love the Haitian People. He taught me the true meaning of love and giving all done with a sense of humor. I am so sorry for your loss.

Posted Feb 09, 2021 at 07:43am
Fr. Frank was a servant priest. From the earliest days, he trained to serve: his family, his community, his Country and his Church. And he did it all very well! Small in stature, he was a giant in effect. Yet, even more impressive, Frank is a deeply spiritual soul dedicated to the charismatic form of prayer and brotherhood. He lives close to Jesus and Mary and they embrace him tenderly. He has an infectious smile and corny sense of humor that engaged friends and others naturally. Left out of the obituary is Fr. Frank's love for Block Island where he and family members spent summer vacations. He frequently filled in at St. Andrew Church as substitute pastor where he is much beloved. From all of us on Block Island, may Fr. Frank rest in peace and, through his intercession, may we journey forth to be reunited with Fr. Frank in eternity. Peace to all family members and friends.
Rev. Joseph Protano
Comment Share
Share via:
B

Father Joe you are so right about Block Island. We were so very blessed to have shared our time on the island with you. Those dinners and celebrating your birthday were truly the best!!!!!!!
KM

Posted Feb 08, 2021 at 11:10pm
Thank you for being an amazing great uncle and for your spiritual wisdom and guidance. I will always cherish our vacations, Sunday dinners at Nana’s house, holiday dinners at my parent’s house (enjoying your favorite Eggplant Parmesan) and phone conversations as we prayed for each other. Your love and great sense of humor will live forever in my heart. I love you.❤️ - Karen Moroso
Comment Share
Share via: 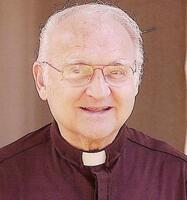