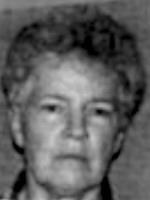 She graduated from Pratt High School, member of St. John Episcopal Church, attended and left the University of Connecticut in 1949, to marry Waldo Charles Latham Jr. (deceased) of Lyme.

While in Lyme she was a teacher's aide at Lyme Consolidated School. She worked as a salesman for Fuller Brush Company, was on the Building Committee for Lyme Congregational Church and a Cub Scout Den Mother. In 1963, she designed and built a new house on a private horse farm on Blood Street in Lyme.

In 1973, she moved to East Lyme and worked for Storybook Stables Inc. becoming Corporate Secretary. In 1987, moved to Westerly, R.I. to work for United Builder Supply Co. Inc. Later in 2005, became a Board Member and Director for Crestview Village Condo Association. She retired from USB Co., Inc. in October 2018. She died peacefully March 28, 2021 at Royal Westerly Nursing Home.

All services are private. Gaffney-Dolan Funeral Home, 59 Spruce St., Westerly, RI is in care of the arrangements. For online condolences please visit www.gaffneydolanfuneralhome.com