To share your memory on the wall of Elynor Lamkins, sign in using one of the following options:

Born in Michigan to Richard L. and Eleanor Mullaney Sr., Elynor spent the majority of her childhood in Avon, Connecticut, where she graduated from Mount St. Joseph’s Academy. She married George in 1955, and they moved out west, eventually settling in southern California where they raised their six children on a small ranch with horses, sheep, goats, cows, chickens, dogs, and cats. In those days, she was known as “Cindy” to her local family and friends.

The pull of family and the beautiful change of seasons lured her and George back to New England in the 1980s where they eventually settled in Westerly, Rhode Island in 1984. While George’s wanderlust took him cycling all around the country and finally back to southern California, Elynor remained in Rhode Island, her permanent home, close to her sisters and brother.

Elynor loved and supported her children unconditionally. She proudly shared their accomplishments, loyally held their confidences, and served as a safe harbor during times of tribulation. She carried their pictures in her daily prayer book, talking to the Blessed Mother Mary every day on their behalf.

A wiz with budgets and finance, at various times in her life Elynor worked as a bank teller, real estate agent, and broker. She also wrote a children’s book, illustrated by a local equestrian artist. However, she considered nursing her greatest professional vocation, graduating with high honors at 60 and continuing to serve through her 70’s, including Apple Rehab Clipper in Westerly. She loved being referred to as “the kid” by her patients. Eventually, when she could no longer meet the physical demands of the job, rather than retire, she kept her nursing license and became a Patient Sitter, offering quiet comfort to the mentally desperate. She also volunteered for disaster relief services in the US and Haiti.

Elynor loved to travel, whether it was a religious pilgrimage, an extended visit with her children and grandchildren, an adventure with a sibling or touring her beloved Ireland. She appreciated all kinds of music, learned how to play the guitar, and it was not uncommon to see her “boogying” around the house. She had a dry sense of humor but loved the occasional prank and a good laugh, especially with her siblings.

As a devout Catholic and a person of deep faith, Elynor dedicated much of her life to the preciousness and quality of life whether it be for the unborn, the impoverished, the suicidal, or the elderly. Well known to the pastors of both St. Pius X and Immaculate Conception Churches, Elynor was a daily communicant and regular adorer at the Perpetual Adoration Chapel at Immaculate Conception.

Elynor is survived by her children, Bonnie (and Yves) Jeanfrancois, Brian Lamkins, Mark (and Myra) Lamkins, Perry (and Suzanne) Lamkins, Jennifer Lamkins (and Ashley Ratliff), and Colleen (and Henry) Rainone, as well as her numerous grandchildren, great grandchildren, nieces, and nephews.

The Mass of Christian Burial will be celebrated at Immaculate Conception Church, 111 High Street, Westerly at 10am on April 9, 2021. Burial will be private. Gaffney-Dolan Funeral Home, 59 Spruce Street, Westerly, RI is in care of the arrangements. For online condolences please visit www.gaffneydolanfuneralhome.com
Read Less

We encourage you to share your most beloved memories of Elynor here, so that the family and other loved ones can always see it. You can upload cherished photographs, or share your favorite stories, and can even comment on those shared by others.

Posted Apr 07, 2021 at 09:45pm
Aunt Elynor was my Godmother and is the subject of many fond memories over the years..yearly birthday cards ,,occasional phone calls to chat. Remembering myself as a young Marine in 1969 on the way to Camp Pendleton in California,,Aunt Elynor picking me up at the airport and opening up her home to me when I flew out a few days early for a visit with the relatives ,,and then her and Uncle George driving me to Pendleton to report for duty on time. And more recently, frequent visits to my parents home in Connecticut, and on one occasion fixing a flat tire. An aunt of commitment and strong faith. May she Rest In Peace and may her memories provide peace and comfort to family and friends.
Comment Share
Share via:

Thank you, Cousin Bric. Think we still have a photo of all of us sitting on our living room couch. She revered your dad and had so many laughs with your mom.

Posted Apr 07, 2021 at 06:16pm
My Aunt Elynor was a beloved sister-in-law to my mother, Helene Mullaney, who always enjoyed her company. After my mother's death, Elynor visited my father, (her brother) Dick Mullaney and generously gave time, love and comfort to him. I was the little flower girl when Elynor married her husband George. My older brother Bric, the ring bearer, and I were both red-heads just like our aunt. In a fit of brotherly "love", Bric chopped off my long hair the night before the wedding. So that is my earilest memory of my Aunt. She was an accomplished woman of faith. May she rest forever in the hearts of her children and grandchildren.
Comment Share
Share via:

Thank you, Lennie. I did not know about the "haircut." Oh, the cherished memories. 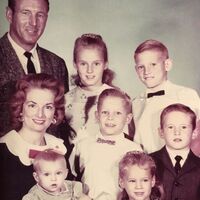 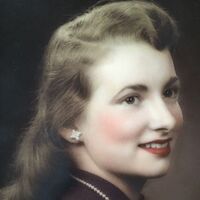