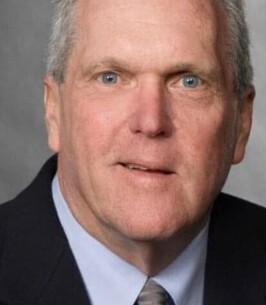 John “Jack” Joseph Donohue, 75 of Pawcatuck went to be with his heavenly Father on December 16, 2021.

Born in Westerly RI to Catherine and John Joseph Donohue, Jack was the eldest of five children. He became the man of the house at the age of 7 when his father passed away. Raised in Pawcatuck by his mother and Aunt Mary Donohue, Jack attended St. Michael’s School and graduated from St. Bernard’s High School in 1963. Following his schooling, Jack enlisted in the U.S. Navy, and was assigned to serve on the U.S.S. Brush DD-745. He was a veteran of the Vietnam War. He received the Combat Action Ribbon and numerous service medals during his three tours in Vietnam. In 1967, Jack married his sweetheart Patsy.

Following his honorable discharge from the U.S. Navy, Jack worked for 34 years for Electric Boat. Jack began his career as a Test Mechanic in the Shipyard Test Organization (STO) and rose to the rank of Chief Nuclear Test Engineer. He retired as a Site Manager for Electric Boat at Newport News, VA. After a few years of retirement, Jack returned to become a full-time employee as a consultant for the U.S. Nuclear Regulatory Commission (NRC) and worked in this position for approximately five years. Later, Jack continued to serve as an Engineering Operations Consultant. He most recently expressed an interest in getting his Juris Doctorate, ever wanting to learn, grow and develop further interests.

While working and raising his family, Jack earned an Associate Degree from Thames Valley State College, a Bachelor of Science Degree in Industrial Engineering Technology from the University of New Haven, and a Master’s Degree in Business Administration also from UNH. Jack served his community as a volunteer firefighter from 1975-1985 and was on the Stonington Board of Education from 1996-1998. Jack was a lifelong communicant of St. Michael’s Church and volunteered as a CCD teacher for the parish youth.

In addition to Jack’s military, educational and career attainments, Jack was accomplished on the golf course and was a PGA certified teaching instructor. He even joined the exclusive hole in one club at the 6th hole at Winnapaug Country Club. He relished time on the golf course with his friends and sons and was most recently a member at Elmridge Golf Club. Jack was also a NRA firearms instructor and loyal fan of the Red Sox and Dallas Cowboys. One of Jack’s favorite places to be was in Jupiter Florida, where he golfed and enjoyed time with his wife, family, dear friends and dogs.

Jack was predeceased by his parents and his sister Catherine D. Lathrop, brother Msgr. Michael T. Donohue, and nephew Charles J. Lathrop. He is survived by his loving wife of 54 years Patricia “Patsy” Cassell Donohue and his brothers, Joseph S. Donohue (Debbie Burlingame) and Christopher Donohue. He was the proud father of four sons and their wives and children, John J. Donohue Jr., Patrick M. Donohue (Erin), Sean C. Donohue (Kelly) and Timothy G. Donohue (Colleen). He will be sorely missed by his seven grandchildren, John J. “Jack” Donohue III, Keegan Donohue, Maxwell Donohue, Benjamin Donohue, Kasey Donohue, William Donohue, and Rose Donohue. He is also survived by many loving nieces and nephews as well as brothers and sisters-in-law. His family takes comfort in knowing he will be hitting the fairways and reuniting with his loved ones that went before him.

The Donohue family would like to thank the hard-working staff of Lahey Clinic, L&M Hospital, Westerly Hospital, Boston Medical Center, and Mystic Rehabilitation Center, as well as all of Jack’s doctors and staff.

Visiting hours will be held from 4-7pm on Tuesday, December 21, at Gaffney-Dolan Funeral Home, 59 Spruce St., Westerly. Masks required to enter. A Funeral Liturgy will take place at St. Michael Church, 60 Liberty St., Pawcatuck on Wednesday, December 22, at 11 a.m. with the burial to immediately follow at St. Michael Cemetery, Stillman Avenue, Pawcatuck. There is no procession from the funeral home to church. For online condolences please visit www.gaffneydolanfuneralhome.com