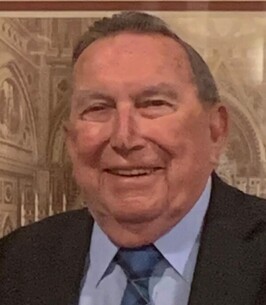 Westerly - Robert G. Scott, 90, longtime resident of Westerly, died peacefully at his home on March 21, 2022. He was the husband of Anne Scott for 67 years.

Bob was born in New Haven, Connecticut, the son of the late Robert and Margaret Scott. Raised in Stirling, Scotland, Bob served three years in The Royal Air Force before returning to the US with his wife Anne. Bob was a dedicated employee of George C. Moore Company for 43 years. He was a member of the Knights of Columbus and a member of the Board of Directors for many years at the Westerly Community Credit Union.

He will be sadly missed by his daughters, Kathryn Smith (Robert) of Westerly and Maureen Gosselin (Michael) of Jewett City, CT, and son Stephen Scott (Lisa) of Westerly. He was the loving grandfather of six grandchildren and six great-grandchildren. Bob was predeceased by his son Brian James Scott in 1989. Bob also leaves three sisters, Catherine Fusaro of Westerly, Eileen Villis and Joan Menzies both of Scotland.

A Mass of Christian Burial will be celebrated at St. Pius X Church, 44 Elm St., Westerly on Monday, March 28 at 10am. Visiting hours are omitted. Burial is private. In lieu of flowers contributions may be made to Continuum Hospice and Palliative Care, St. Pius X Church of Westerly or American Heart Association. Gaffney-Dolan Funeral Home, 59 Spruce St., Westerly is in care of the arrangements. For online condolences please visit www.gaffneydolanfuneralhome.com