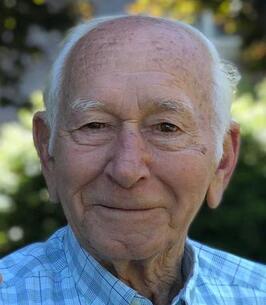 At the age of 21 Joe realized a childhood dream when he became a licensed pilot, and enjoyed a love of aviation his entire life. On June 27, 1948 he began an even greater love affair with his wife of nearly 74 years, Nancy Cooper Rustici. Joe and Nancy’s love for one another never wavered through all the long years they had together, and she was by his side when he peacefully departed this life on April 12, 2022 in the Pawcatuck home in which he lived for most of his life.

Joe had three careers, first as dairy farmer, then as an electrical test supervisor at Electric Boat in Groton, where he was part of the crew that built America’s first nuclear submarine, The Nautilus. He is most remembered as the founder, along with his brother Charles, of the Elmridge Golf Course, built on the fields and pastures of the dairy farm on which he grew up. Well into his 90’s, Joe could often be spotted making improvements to the course on his beloved backhoe.

The family wishes to grieve privately at this time. A celebration of Joe’s life and legacy will be held at Elmridge Golf Course at a future date.