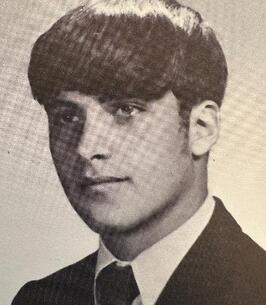 John R. Cherenza, 69, of Ledward Avenue, Westerly, RI passed away May 9, 2022, at Westerly Hospital. He was born in Westerly RI, son of the late John “Jake” Cherenza and Barbara Monty Cherenza. He graduated from St. Thomas More Academy.

John worked construction as a laborer, which suited him well given his strong and rugged physique. He set concrete forms for Ready Concrete and worked for Cherenzia Excavation with his cousin, the late Salvatore “Sam” Cherenzia, III, from time to time.

In his younger years, he spent summers in Misquamicut with cousins and friends, frequenting the Blue Sands, his Uncle Salvatore “Sam” Cherenzia II’s bar/nightclub. He was also an accomplished sketch artist.

In his later years, John’s primary mode of transportation was walking and/or biking from Ledward Avenue. He could often be seen in downtown Westerly, sometimes offered a ride by a passer-by that knew him to get to his destination quicker. He could be found reading the newspaper, most frequently The New York Post, in Wilcox Park or at his seat at Danny’s Bar, always in engaging and lively discussion with friends, other patrons and bartenders.

John was devout in his Catholic faith and spent many hours reading and studying the bible, he could recite verses at a moment’s notice for any particular situation. For those who knew John, his intelligence was only surpassed by his memory (and at times, his unfiltered honesty). He would always impress with his knowledge on varying subjects and the ability to retain and recall events, and always left you with an appropriate aphorism. His kind and gentle side came out with his affinity for cats as he would take in strays and care for them. Therefore, donations in his name may be made to Stand Up For Animals, Larry Hirsh Drive, Westerly, RI 02891

A Mass of Christian Burial will be celebrated at 10 a.m., Thursday, May 26, 2022 at St. Pius X Church, 44 Elm Street, Westerly. Burial will follow at Sebastian Cemetery, Westerly. Gaffney-Dolan Funeral Home, 59 Spruce St, Westerly is in care of the arrangements. For online condolences please visit www.gaffneydolanfuneralhome.com