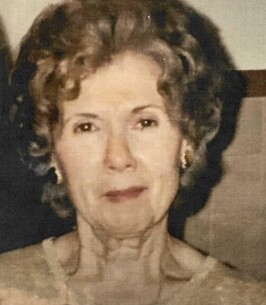 Frances M. (Ricci) Pucci passed away peacefully on July 12, 2022, at the Westerly Hospital. She was 92 years old. She was born in Cranston, Rhode Island to the late Settimio and the late Rose Ricci. She moved to Westerly to be with her beloved husband of 59 years, the late James A. Pucci Jr, who predeceased her in 2010.

Mrs. Pucci was a licensed beautician who, upon leaving the profession to raise her family, maintained her license in order to use her skills to help family and friends. In those years she also worked for the Washington Trust Company. Both she and her husband owned and operated Jim’s Trailer Park on Atlantic Avenue, a business which began with Jim’s father in 1923.

An active member of her parishes, she began at Immaculate Conception where she was part of the Mother’s Guild and later taught CCD. In later years, as a member of St. Pius X, she and her family hosted yearly beach Masses celebrated by Rev. Raymond N. Suriani for the youth group of the parish.

A contributor to many charities, St. Jude’s Children’s Research Hospital was one of her favorites. She remained actively involved with the hospital until recent years. Yet another passion of Mrs. Pucci’s was cooking. She loved to bake cream puffs, Red Waldorf Cake Christmas cookies, and so much more.

Visting hours and a collation will be omitted due to Covid.
A Mass of Christian Burial will be celebrated at St. Pius X Church, 44 Elm St., Westerly on Monday, July 18th at 10:30a.m. Burial will follow at St. Sebastian Cemetery, Westerly. Gaffney-Dolan Funeral Home, Westerly is in charge of arrangements. In lieu of flowers, donations may be made to St. Pius X Catholic Church and St. Jude’s Children’s Research Hospital. For online condolences, please visit www.gaffneydolanfuneralhome.com.