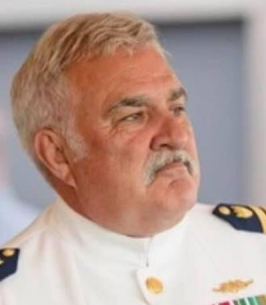 Ledyard, CT - It is with devastated hearts we announce the unexpected passing of our beloved husband, father, brother, uncle, and grandfather, Capt. Craig A. Gilbert (RET) on September 2nd, 2022. He was 61.

He was born to the late Jacqueline and Gary Gilbert in Sayre, Pennsylvania. Craig was raised in Mystic, Connecticut where he attended St. Bernard High School and played football, wrestled, and ran track. After graduating high school in 1978 he was a collegiate athlete, playing football and hockey for McGill University in Montreal, Canada. Craig then transferred to the United States Coast Guard Academy and graduated in 1984, earning a degree in marine engineering.

Craig went on to have a successful career in the Coast Guard, including commanding the rescue of nine crew members from the Bering Sea, being deployed during the Perfect Storm, and serving as the Captain of Coast Guard cutters Firebush 1995-1998 and Storis 2000-2002. He retired in 2009 after 25 years of honorable service to his country and, for the rest of his life, would continue to serve his family as a civilian contractor for two separate successful family businesses: Independence Physical Therapy and Cole Engineering.

He was married to his best friend and soulmate Jeanne for 35 years. In addition to being a devoted and loving husband, he was an incredible father to three children, Tucker, Tessa, and Dean. After his military career at sea, Craig turned his attention to the land, eventually cultivating a beautiful garden and orchard. Never a lawn had straighter lines with as many trees. Craig never missed a crossword puzzle or sudoku, was an avid tinkerer, and a dedicated mentor to all he could teach.

Craig’s greatest title remains “Skipper” to his six grandchildren: Jack (4), Grant (3), Peyton (2), Wavey (20mos), Piper (4mos), and Bentley (2mos). As a grandfather his days were filled with laughter, his heart with love, and his hands with rocks and dinos. He will be missed by all who knew him, and his witty sense of humor and boisterous laugher will live forever in our hearts.