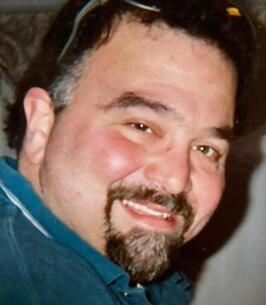 "Promise yourself to be so strong that nothing can disturb your peace of mind.”

Angelo Anthony Lombardo, Jr. 62, of Agawam, MA passed away on Monday, October 31, 2022. Friend to all who met him, brother like no other, devoted dog dad to Regis, and most importantly father of the center of his world, his Princess and Little Mermaid, Angelee Lombardo.

Angelo was a graduate of Westerly High where he loved playing football and helped WHS win the Thanksgiving Day Game in 1976 when he picked up a fumble and scored the second TD of the game. He was also a self-proclaimed lifelong learner at the School of Hard Knocks. Everyone who met Angelo immediately felt his big heart which manifested itself in his boisterous and infectious laugh. Within moments he drew you into his circle. He had so many stories about his antics from the time he was a young boy into adulthood. He always said if a book was written about his life, it would have to be in the fiction section because no one would believe it.

Angelo’s passion for cooking began as a boy at the knee of his Mom who, he insisted, put fresh parsley in everything. Perhaps this was where his love of the “green leaf” began. As the owner of several restaurants, including Wimpy’s Beach Stand, Deep Water Lobster Co., and Sirena’s Seafood, he perfected his culinary creations for patrons who left fatter and happier. He continued working at restaurants and yearly, the Big E, where people would line up for a taste of Angelo’s bites. But nothing was more special than when he cooked for you personally, taking fresh ingredients from his garden, he was so proud of, and creating love on a plate.

He loved his big, crazy Italian/Lebanese family and gatherings will not be the same without him. The shoreline of Westerly was his first love and where he began his restaurant dreams. Angelo loved to travel, especially to Thailand, where he grew to love the culture, the food, and his family there.

The family would like to thank their extended family and friends, and the doctors and nurses at Baystate Medical Center for their love and support during this time. The impact Angelo had on them was evident from the stories they shared about him.

Visiting hours will be held at Gaffney-Dolan Funeral Home, 59 Spruce St., Westerly, RI on Saturday, November 5 from 10:30am-12:30pm, immediately followed by a Funeral Service at 12:30pm in the funeral home. Burial is private. In lieu of flowers donations may be made to Angelee Lombardo’s education fund, c/o Wendy Lombardo, 4163 West Shore Manor Road, Jamesville, NY 13078. For online condolences please go to www.gaffneydolanfuneralhome.com